What parts of my project will transfer when using the XML Export feature?

We've designed the Export to FCPXML feature to be as seamless as possible, but there are a few things to know in order to get the best results.

Because every editing system uses a different structure for editing and effects, not all of the features found in LumaFusion will translate across to FCPX.  This page details what features are supported and how to manage unsupported features once you get your project into FCPX.

Tap here for a complete tutorial on using the Export to FCPXML feature.

What Features Will Transfer from LumaFusion with FCPXML?

Some features do not have an equivalent in Final Cut Pro X and are currently not supported during the XML transfer from LumaFusion to Final Cut Pro X. In future updates, export to FCPXML will support more of these features.

* The Video Cut - Audio Cross transition does not have an equivalent in FCPX, so the audio cross fade is represented as a ramp in the audio waveform. This can be hard to see, unless you increase the height of the audio waveform. Alternatively, you can detach the audio tracks in FCPX, to see the audio tracks overlap.
** Fade-in and fade-out transitions (cross dissolves against black) that are located in the middle of the timeline rather than at the head or tail of the timeline do not have an equivalent in FCPX, so those transitions will be replaced with black clips so that you can easily add crossfades in FCPX to create the fades.
*** Titles are transferred as images only and are not editable in FCPX.

A few other things to know

Using the 'VideoCut-AudioCross' transition in LumaFusion.

There is no equivalent transition in FCPX, so instead we automatically create audio keyframes to create the audio cross fades in FCPX.

In this example our LF project is using 4 clips on the main track with 'VideoCut-AudioCross' transitions. 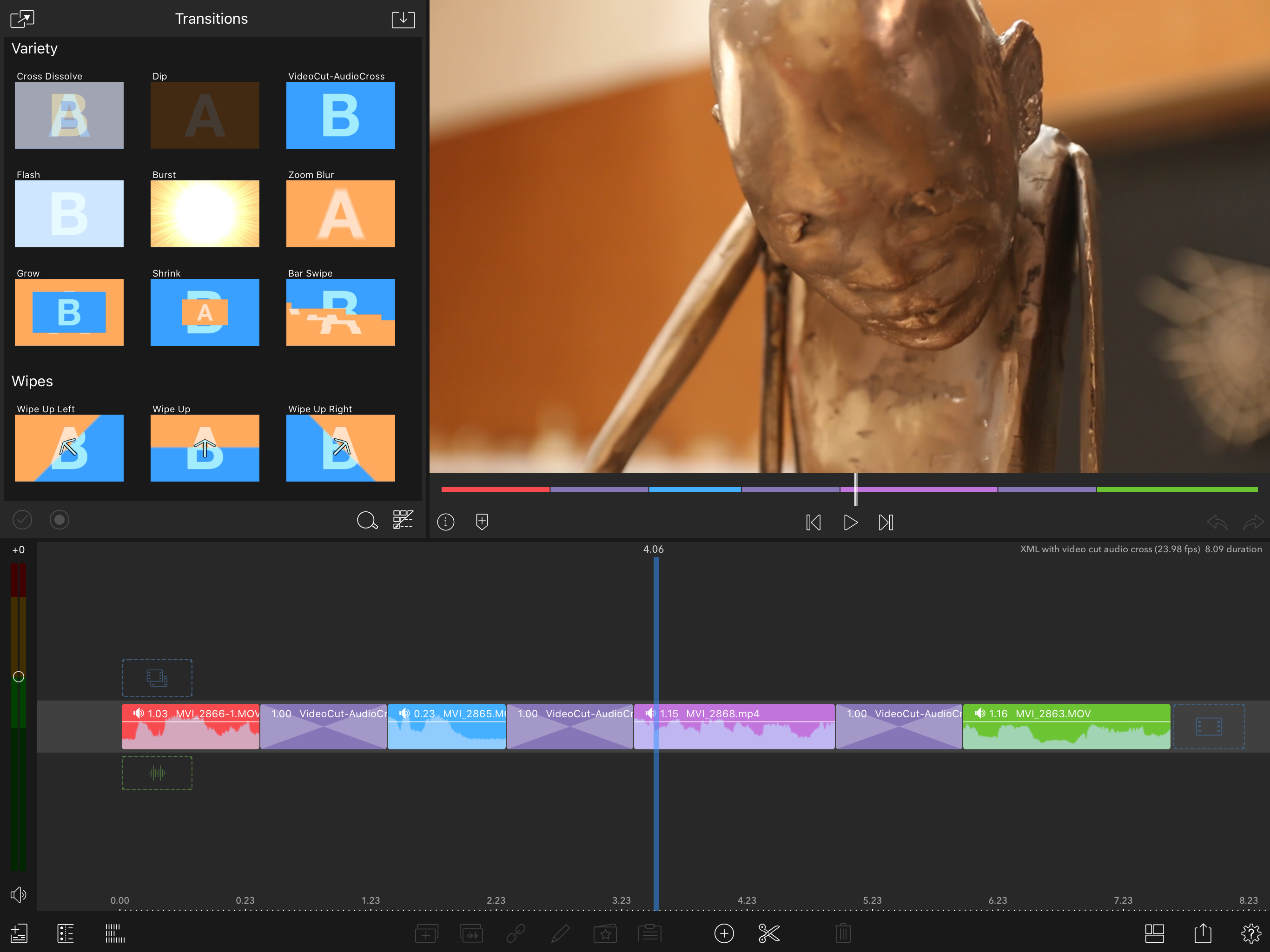 Here is what the Timeline looks like in FCPX; note that there are no transitions between the clips. 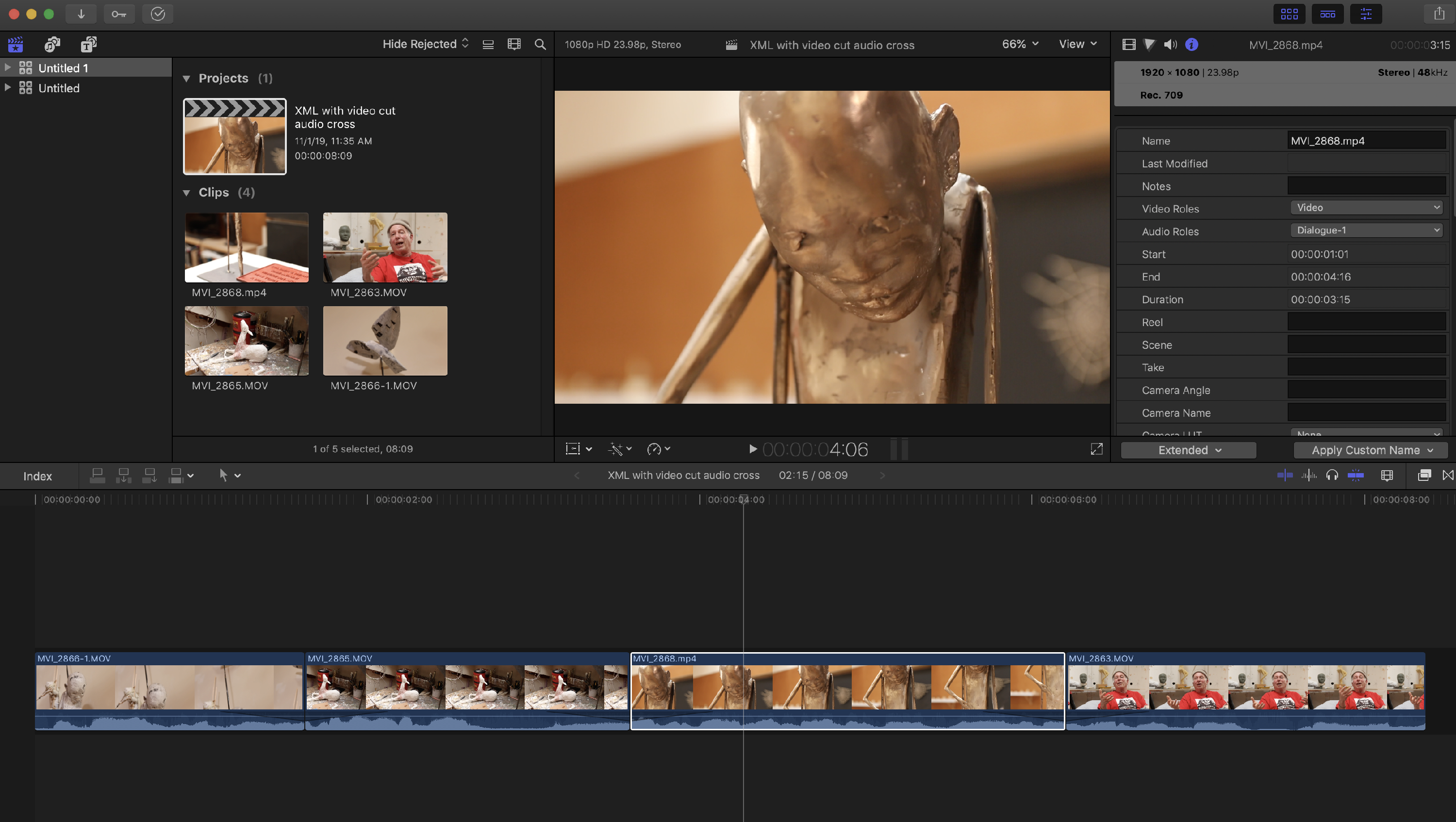 But if you expand the audio on the clips, you will see that the audio overlaps and that they have keyframes creating the crossfades from clip to clip. 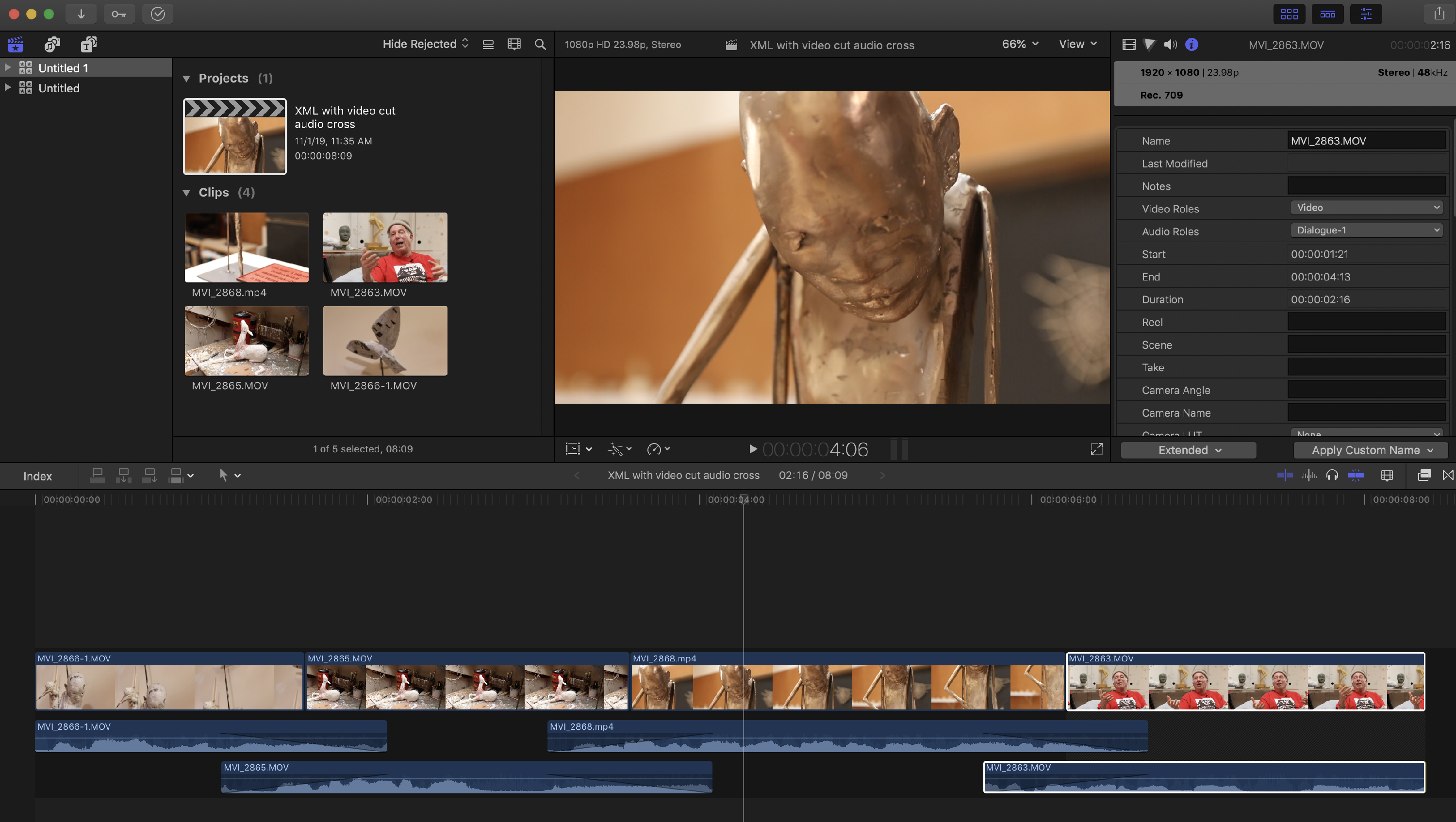 Transitions from or to black on the main track.

On the main track there are two clips separated by black. There is a fade to black and a fade from black. 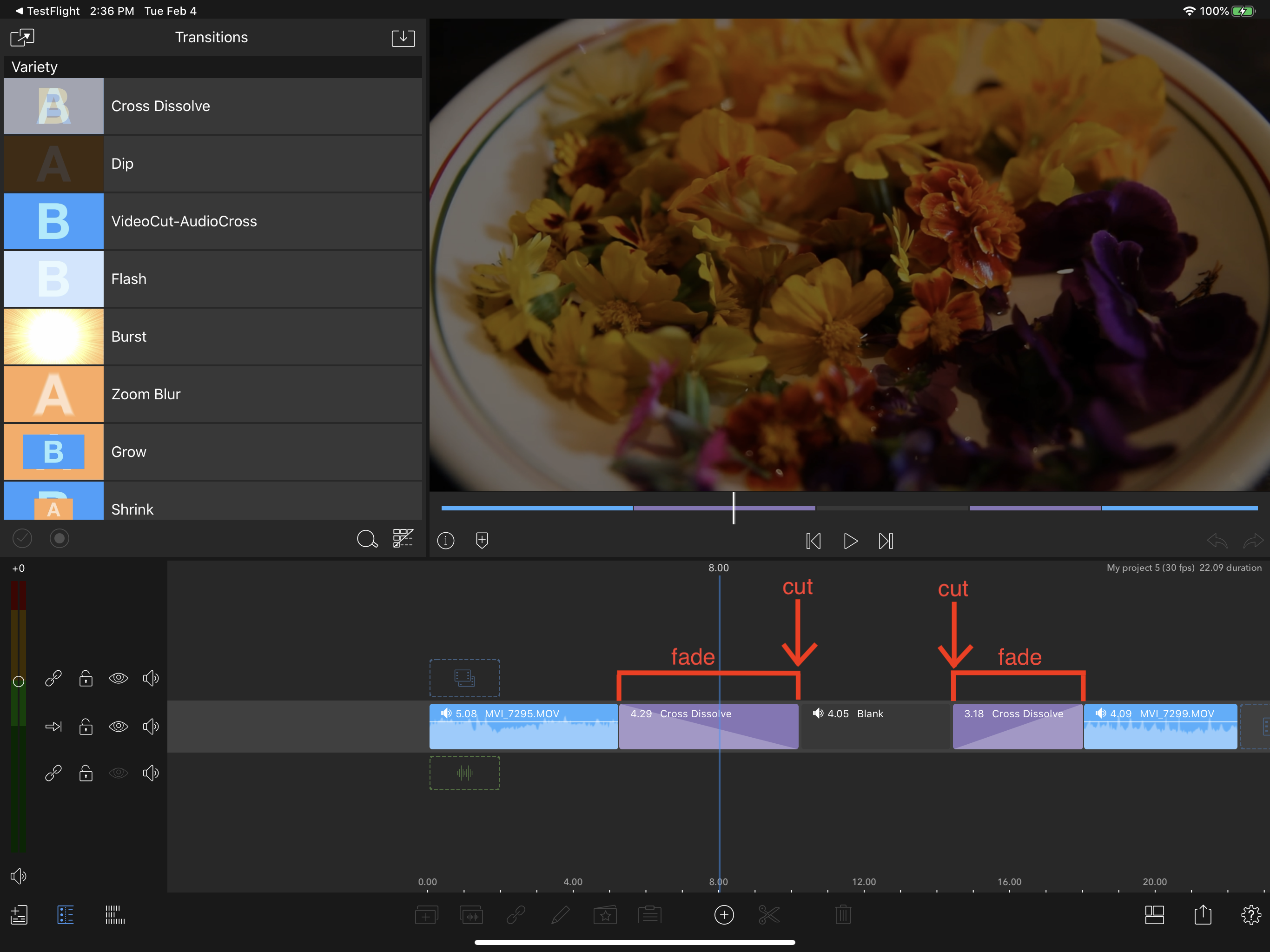 This is how the same timeline will appear in FCPX. Notice that the transitions are represented by the video clips media, but are called by the transition name.  They are separated by a match frame cut. 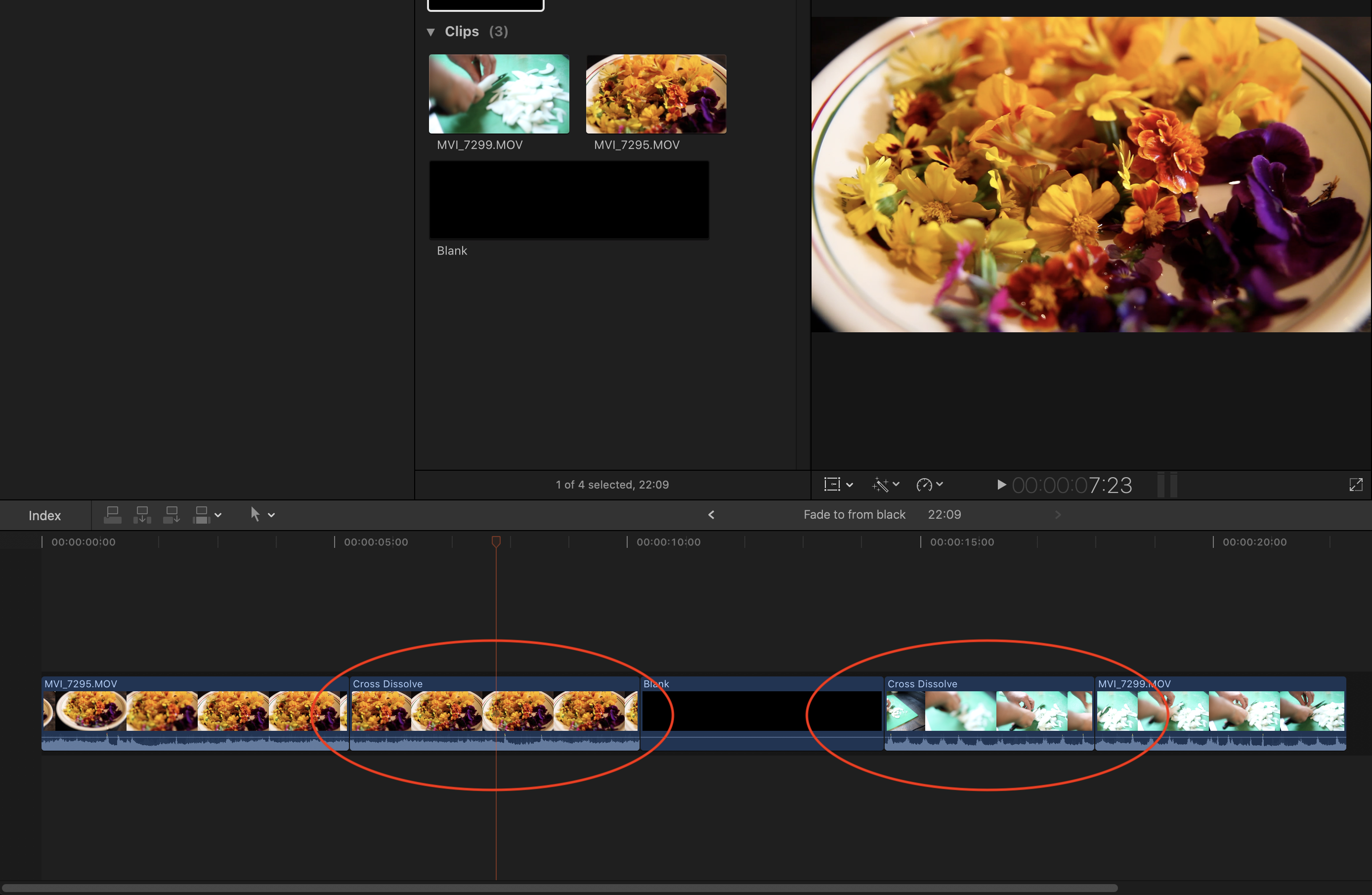 To convert these clips to transitions we cannot just drag a transition on to them.  First we have to change these transition clips into compound clips.

Select a transition clip, right click on it and select 'New Compound Clip. . .' from the menu.  You will be promoted to give the compound clip a name since it's going to appear in the library.

You'll then see something like this in the timeline 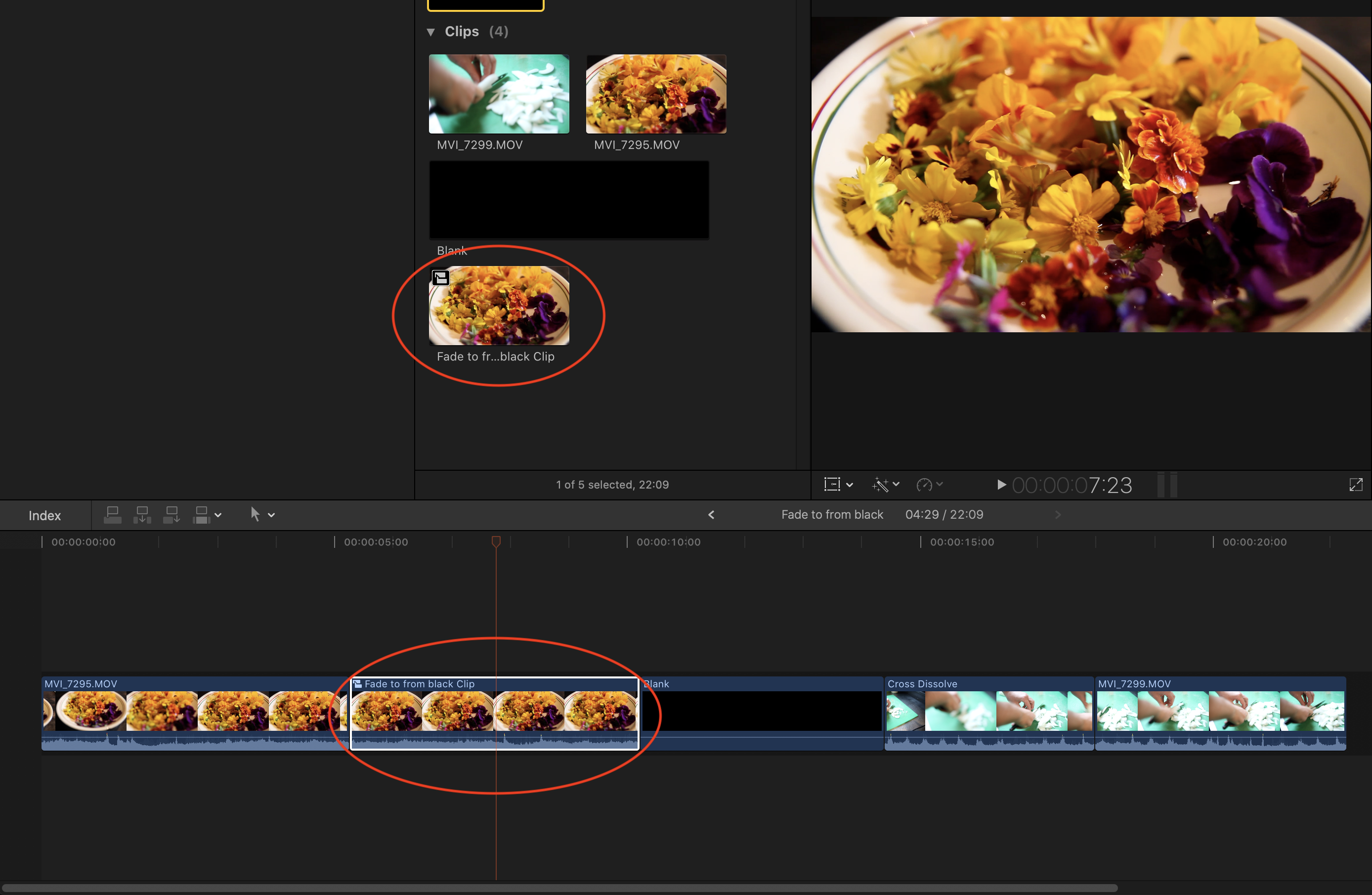 Double click on the compound clip in the timeline to open it, then add your transition. 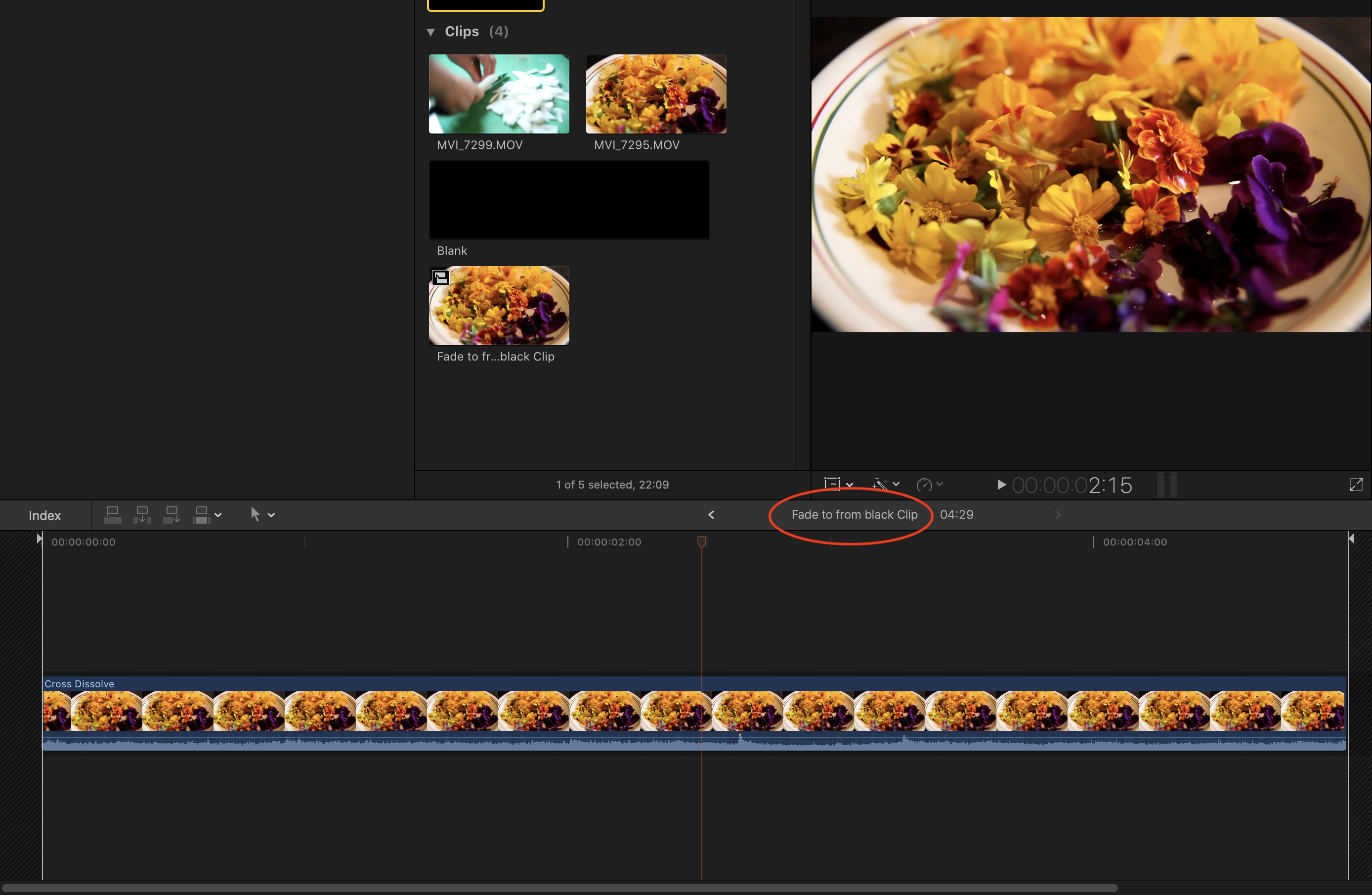 Place the transition at either the start or end dependent on wanting a fade up or fade out, then trim to the correct duration. In this case, a fade to black, so the transition is placed at the end of the compound clip. 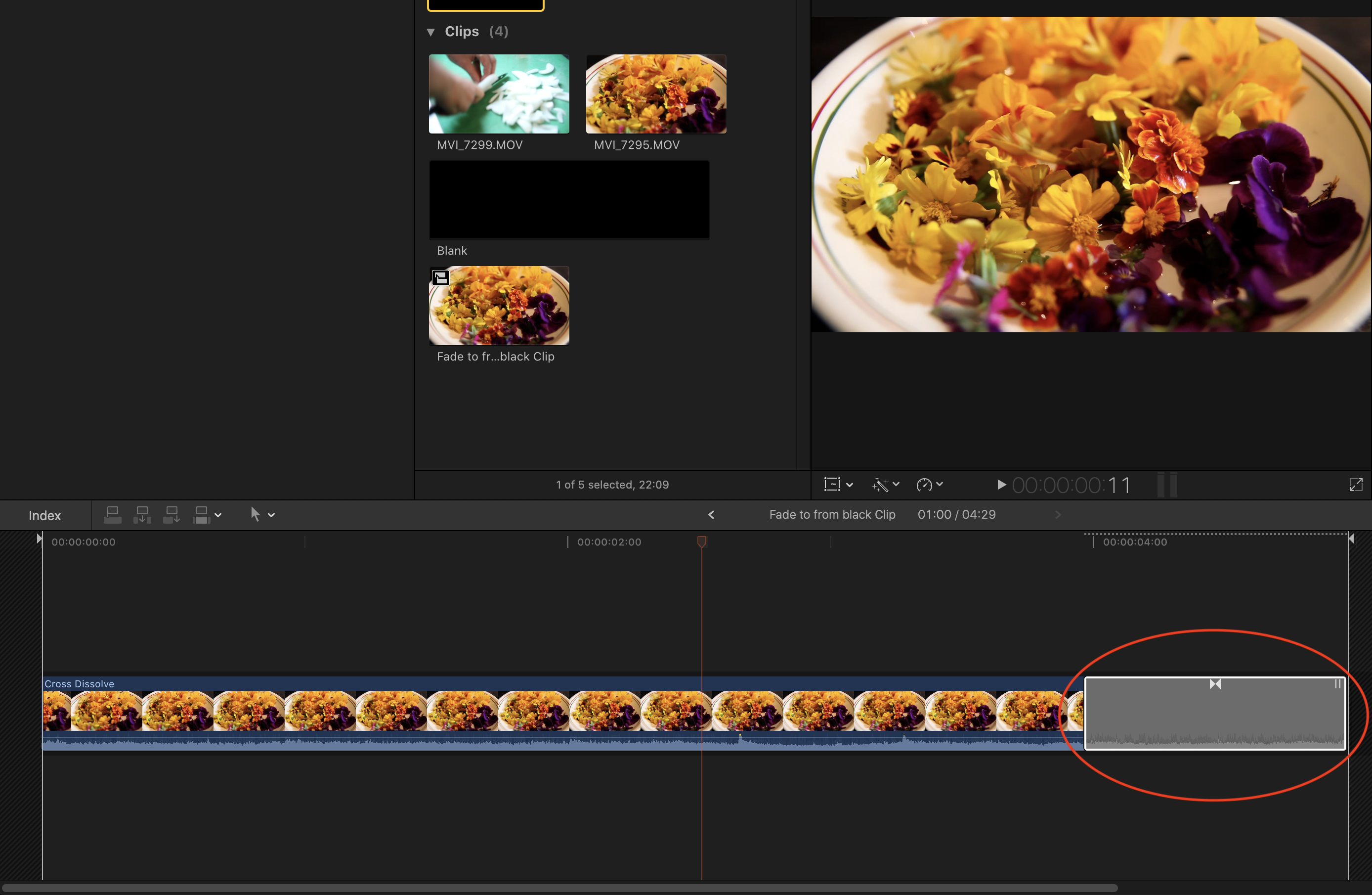 Click on the left arrowhead button to return to the Timeline. 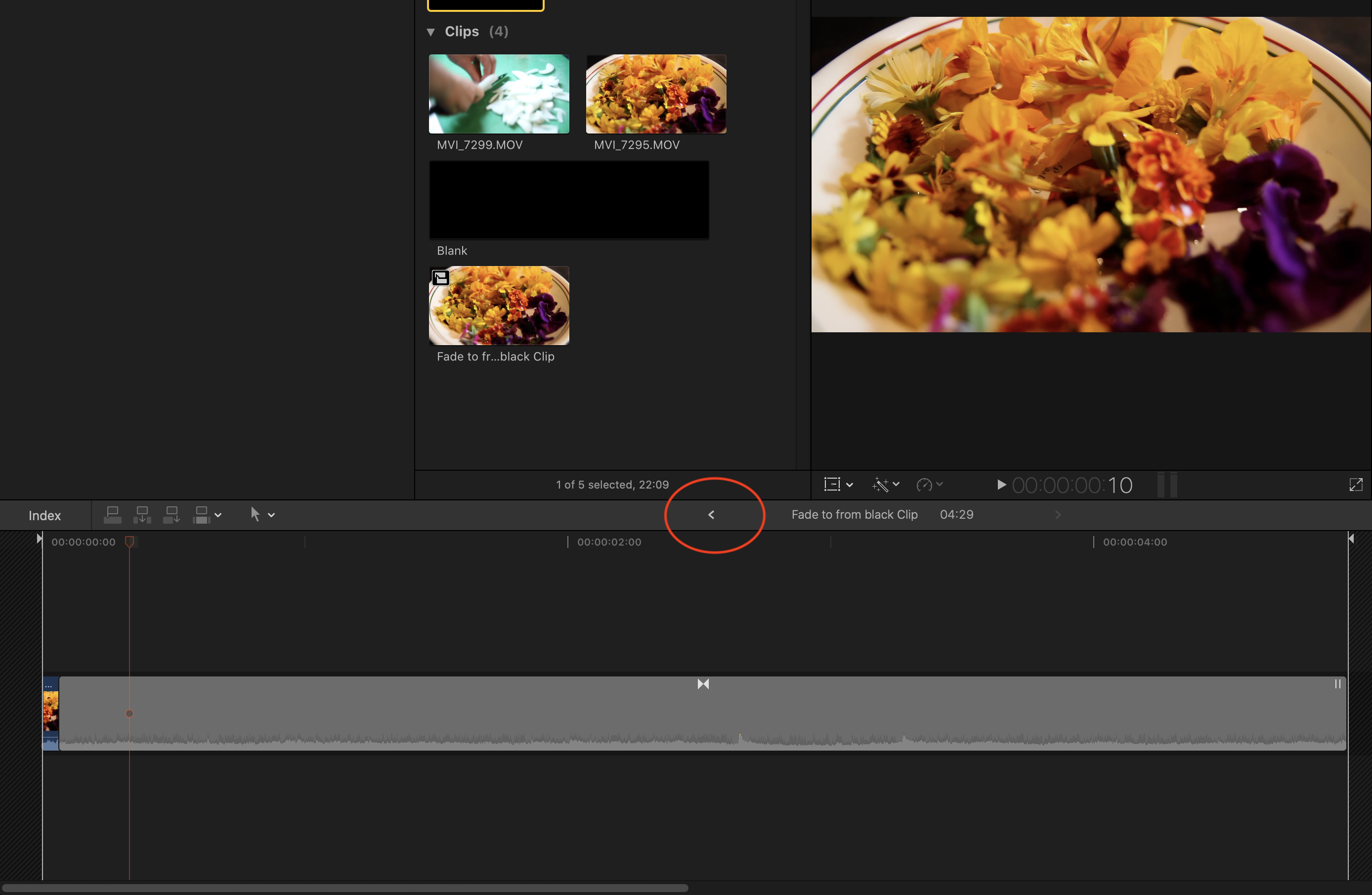 Now you will see your compound clip that has a transition inside of it. 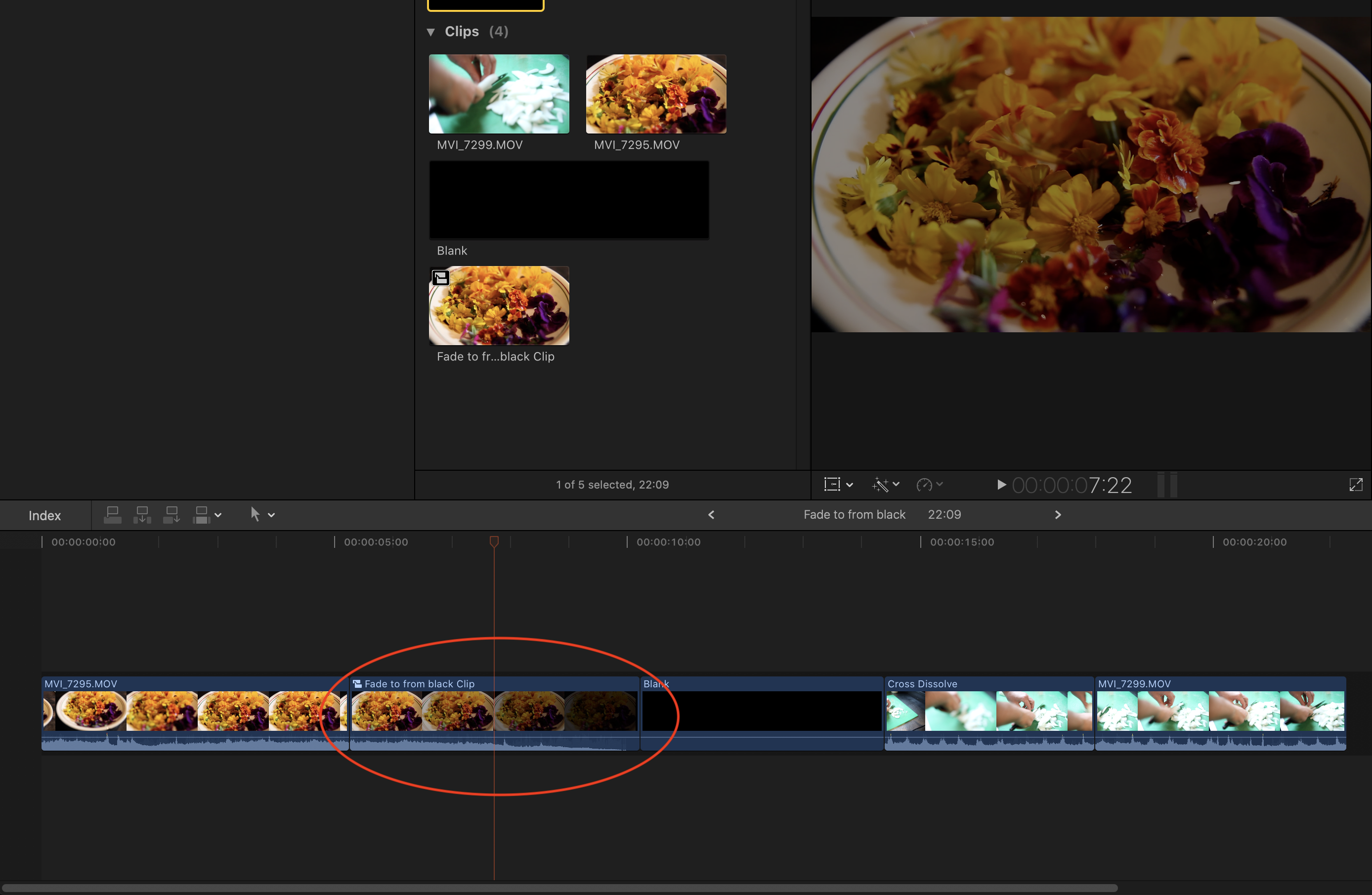 There are typically two reasons why you might choose the ‘No Relinkable Media’ option. Either a) you are working with proxy media or b) you want to avoid exporting very large FCPXML files. In either case you will want to be able to relink the clips in FCPX to the original media.

If you plan on exporting an XML file using the ‘No Relinkable Media’ option, then please follow these guidelines:

With the first two options, 'Full' and 'Trimmed', the resulting FCPXML file will contain media copied from LumaFusion and you will not have to consider how to relink media in FCPX. When you open this file in FCPX it will use this media to populate your timeline and allow you to continue to edit. However since you are sending media with the FCPXML file, the file itself could be several GBytes in size.

Using the 'No Relinkable Media' option will only send media that cannot be relinked in FCPX. This keeps the FCPXML file size to an absolute minimum. But there are a few things to know before using this particular option.

How does LumaFusion define relinkable media?

LumaFusion will ‘flag’ media as being relinkable as long as it is imported properly.

In general all media imported into LumaFusion will be regarded as relinkable, however, there are a few exceptions to this:

However, there are times when you need to manually relink clips to media files:

In either case, manually relinking connects the clips in Final Cut Pro to the correct files on your Mac or storage device. Metadata in the relinked clips remains unchanged.

Using four different cameras, two DSLR type cameras, and two drones. None of the cameras allow for assigning unique identifiers for each camera. It's is important then, to keep each cameras media in individual folders.

The XML file that is created by LumaFusion will auto relink to your media if you have the USB-C drive connected to the Mac and it has the original folder structure.  Or you can manually relink the media.

You can also connect the USB-C drive to the Mac and copy the media including the folder structure to the internal or other connected drives which provides redundancy for your footage as well as the ability to continue to edit in LumaFusion and export incremental XML files to FCPX relinking each time.

The resulting FCPXML will include any media that is not considered 'relinkable'.  This will be the voice over, titles and music tracks.  All media from Dropbox will be considered as relinkable.

On your Mac ensure that you download your media from dropbox to your SSD or HDD and relink manually.

If you have Dropbox setup correctly on your Mac, Final Cut Pro can auto relink to this media.

For More Info on Using Relinkable Media, check out this video: